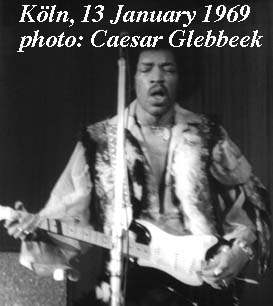 A significant Jimi Hendrix Experience concert tape, recorded by a member of the audience in the “Sporthalle,” Köln, Germany on 13 January 1969, has recently surfaced.

This new tape takes its place among a dozen other recordings of European gigs between 8 and 23 January 1969, in Göteborg (first show), Stockholm (two shows), Copenhagen (two shows), Hamburg (first show), Münster, Nürnberg (first show), Frankfurt (second show), Wien (two shows), and Berlin. (This was a busy time for the JHE, who also played gigs in Düsseldorf, Stuttgart, and Strasbourg in this period, though no tapes of these gigs have yet surfaced.)

The quality of the Köln performance is good, if not up to the superb levels achieved at the second show in Stockholm (see UniVibes #40, December 1969, pp. 8-16), or at times in the Copenhagen, Frankfurt, and Wien shows.

The audio quality of the Köln recording is significantly better than that of many audience tapes, though there are a few audio glitches and too much microphonic feedback. But Jimi’s guitar and vocals are both strong in the mix, and the bass guitar and Noel’s backing vocals are both clearly audible.

This tape includes some music previously believed to have been recorded in Stuttgart, Germany, on 19 January 1969. It has been patched with about 0:50 of that “Stuttgart” tape (adding some chat from the stage), and speed-corrected, especially in the final medley. Total time for the Köln tape: 56:24.

The set opens with “Come On (Part One)” and “Foxy Lady” (previously heard on the “Stuttgart” tape), and “Red House” (of which over ten minutes is new: “Stuttgart” included only a 2:17 excerpt). “Voodoo Child (slight return),” “Fire,” “Spanish Castle Magic,” and “Hey Joe” are all wholly new. The gig closes with material previously heard on the inferior “Stuttgart” tape, “Sunshine Of Your Love” plus a medley of “Star Spangled Banner” and “Purple Haze.” The material is familiar: each of these songs was recorded an average of 7.5 times in the twelve other recorded concerts from January 1969.

Jimi says “Listen, yeah. Listen, we’d like to – we’d like to – before we start playing, we’d like you to forget everything that happened outside this arena. This arena’d be like a tent, okay? And everybody’ll feel free. But you must listen though, okay: you must listen. And then everybody sit down so everybody else can see, okay? Can you do that? Right. And it’ll take about thirty seconds before we start, okay? Thank you for showing up. Thank you for coming.”

Come On (Part One) (5:01) opens with nearly a minute of improvised rhythmical strumming, though after this section the song follows the same structure as the studio recording.

Jimi blows the lyrics in the first verse, and the second verse is marred by some intrusive microphonic feedback; there are no vocals in the second chorus.

In the third verse, Jimi hits an imaginary joint just after the phrase “feelin’ good.” His guitar playing is confidant and interesting, with worthy solos and a colorful outro. This is the first recorded outing for the song this month, though it was also performed the previous day in Düsseldorf.

Foxy Lady (4:22) opens ugly, with simultaneous harmonic and microphonic feedback. Hendrix plays an extended solo from 2:03-3:00. Feedback problems persist throughout the vocals (back a bit in the mix); a blast of unwanted noise is heard even at the end of the outro.

The complete Red House (12:29) – only the opening note of the first instrumental verse is cut – is one of the best things on this new tape. The next two verses are vocal, with excellent guitar fills. Verses four and five feature fine distorted guitar. In the sixth verse, Noel’s bass is prominent over Jimi’s rhythm guitar. In the seventh, Jimi solos with the wah-wah pedal over restrained accompaniment – a highlight, though a drop in volume from 7:53-7:56 is unfortunate.

The eighth verse opens with quiet soloing, including a sustained whammied trill, but builds to an intense climax, leading into the scorching ninth verse, during which Noel’s bass hammers insistently. A touch of microphonic feedback sounds at the beginning of the tenth and final verse, which is vocal; the quality of the Uher recording is good enough to pick up Jimi’s tongue-click at 12:06.

After another cut in the tape, Jimi promises a “thing called Voodoo Child (slight return).” A good 6:24 version of the song follows. The first solo (1:40-4:06) includes a quiet section at the end in which the texture narrows; some of Jimi’s playing recalls the great Stockholm (second show) 1969 soundboard. The second solo (4:55-5:31) is unfortunately marred by a three-second tape gap near the end. Jimi offers rhythmic work, including some unaccompanied scratching, before a final return to the introductory theme. Jimi plays a few notes with his teeth, just before the end.

A succinct version of Fire (2:44) follows, with a minor audio glitch at 0:02. In the first, second, and third verses, Jimi consistently substitutes guitar sound effects for the final word “fire.” Though the solo (1:05-1:24) and following interlude are both slightly extended, as are the outro solo and ending (2:08-2:44), this version remains shorter than any of the other eleven versions recorded this month. Jimi’s solo is lacklustre, and Noel’s vocal prominence in the choruses adds little.

Spanish Castle Magic (4:23) follows, in a version substantially shorter than any other complete one recorded that month. Jimi inhales before the word “dragonfly” in the first verse (0:26). The extended solo from 1:32-3:18 is slightly disfigured by a volume drop (2:16-2:18). Near the end of the solo, Jimi offers a few interior statements of the main rhythm riff; one wonders if perhaps his bandmates missed a cue.

In the third verse, Jimi sings along with a cool guitar lick, repeating a staccato “where you gonna go” three times (2:25-2:29) in between the main vocal lines, and quoting “I Feel Fine” again at 2:46. Jimi begins the brief but fun outro solo with a wide bend at 3:22.

Jimi introduces Sunshine Of Your Love (6:38) by saying “we don’t know the words, so we’ll do an instrumental, okay? All right.” The cover of the Cream anthem is shorter than all other complete versions of the song recorded that month (excluding, of course, the aborted version the JHE played on the Lulu show for BBC television nine days earlier).

In the second verse, Hendrix quotes “Blue Moon” (as Clapton did in the original). The third verse, leading into a jam, features Noel’s powerful bass; Jimi confines himself to rhythm playing. The intensity gradually builds, with Jimi offering wah-laced rhythm licks just after the four-minute mark.

Quoting “Outside Woman Blues” from 4:33-4:55, Jimi moves on to free improvisation and ascending harmonies. An unfortunate tape edit results in the loss of about a second of music at 5:46, just before the restatement of the main theme for the final verse and outro.

Jimi’s rendition of Star Spangled Banner (2:53) is the last of only four versions taped from January 1969. It opens with a creative feedback introduction of over a minute, starting quietly, and exhibiting, appropriately, a great deal of “freedom.” Jimi’s playing is interesting, if a bit rushed at times; there are also speed and pitch issues, addressed here but not wholly eliminated. The piece ends with some cool, skittering mic-stand slides, and some play with extremely low pitches.

Jimi segues to Purple Haze (4:58), which closes the set. He offers eight iterations of the E7#9/G-A theme before the first verse. A burst of microphonic feedback buries Jimi’s lyric at the end of the first verse. Jimi’s extended solo (1:30-2:12) includes some dental playing at the end. He has some trouble with the lyrics in the third verse, repeating words from the second one (2:37-2:42). Jimi concludes the piece with a lengthy and colorful cadenza, playing a few notes with his teeth near the end (4:20-4:40).

Jimi then says “Thank you very much,” and the Köln performance is over.