This Jimi Plays… feature is one with a difference: it allows us a rare and fascinating insight into the finances of one of Jimi’s earliest UK club performances. After a performance by myself and some friends during the ‘Jimi Hendrix Memorial Concert’ at the National Centre for Popular Music on Monday 18 September 2000 in Sheffield, I interviewed Dave Manvell for UniVibes. Dave attended the Jimi Hendrix Experience concert [60 minutes] at the Mojo Club in the Tollbar, Sheffield, Yorkshire, on Sunday 8 January 1967.

Graham Oliver: What are your reasons for attending tonight’s concert?
Dave Manvell: I came tonight as I thought it would be a good way to remember Jimi Hendrix since it was the 30th anniversary of his death… Also, I was hoping to be able to talk to you afterwards and show you a piece of unique Hendrix memorabilia Peter Stringfellow has loaned to me.

These are the account cards Peter’s mum made out for the night the Jimi Hendrix Experience played the Mojo Club in Sheffield.

As you can see, there was an audience of 416 people, and it cost 5 shillings for members and 6 shillings for non-members. Peter told me that he paid the JHE 50 pounds for the night. 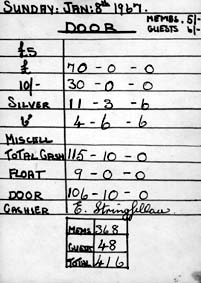 GO: What do you remember of that night at the Mojo Club?
DM: The gig is something that will stay with me forever – a night of rock history. Of course we have to thank Peter Stringfellow as he was very forward-looking and booked Jimi Hendrix to play at the Mojo Club.

But it was touch and go whether the Jimi Hendrix Experience would play that evening in Sheffield as the night before the band had been involved in a drug bust at the Twisted Wheel venue in Manchester. Noel Redding was hung by his coat on some railings by the police, apparently breaking two of his ribs; the officers concerned were later dismissed for this. I met Noel Redding a couple of years ago and he still vividly remembers that night….

GO: How did the Mojo Club gig in Sheffield go?
DM: Even before the gig started there were problems as the Sheffield police had been tipped off about the night before in Manchester. Peter Stringfellow told me an amusing story about this.

The police in Sheffield at that time didn’t quite know what to do when they received the tip-off from Manchester, so they sent in the fire brigade to check upon things! As Peter related it to me, two burly firemen came into the Mojo Club to see Jimi and said to him, “Come on blackie, where are the drugs?” To which Jimi replied, “No drugs in here, man!”

They looked around and could not find anything, so Peter told them to apologise to Jimi, which they did. Jimi replied, “Hey, cool, man” from behind a large spliff he had just lit up….

GO: Did you get a chance to talk to Jimi that night?
DM: Yes, but only a few words. While he was playing I stood on the floor beside him, the stage being only 12 to 18 inches high. When he took a break, he stepped off the stage and asked me the way to the toilets, so I told him to follow me.

As we stood together, he asked me if he could get some “stuff.” I told him to hang around at the club as this was the usual place to buy. Of course it was all very innocent in those days – usually uppers and downers, which had been taken from grannies’ pill bottles.

GO: Can you tell me anything about the guitars Jimi used that night, and what songs he played?
DM: As I remember it, Jimi had two Stratocasters: a sunburst and a blue one.

They played “Purple Haze,” which Jimi said they were going to record (they did so three days later, on 11 January 1967). They also performed “Wild Thing” – Jimi talked about incorporating the British National Anthem into it to suit the occasion.

Jimi also played something he called his version of the Blitz. It had wailing sirens and explosions all generated by his guitar and amps [possibly “Third Stone From The Sun”].

And he did all the usual things, like playing behind his back, playing with his teeth, attacking the amps with his guitar, and bouncing the guitar on the stage. I recall him changing to the blue Strat for the destructive bit.

Musically, it was a real turning point in my life. I remember going back home after the gig and being unable to sleep from all the excitement at the show, I wrote the following poem:

GLIMPSE
Through the haze
Through Color the light
Into tomorrow
Stars light the purple haze
Tall bronze man running into the haze
Disappears in the velvet of the night.